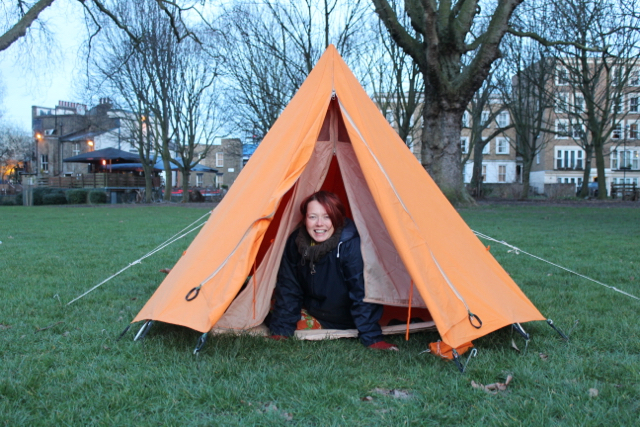 Hackney Today interview with Outdoor People’s Cath Prisk , discussing the growth from market stall to partner in a global campaign.

children to play outdoors from her time living in Iraq as a child.

“But during term time, we lived in Liverpool. We would come back from school, throw down our bags and go out, playing in the wild spaces in a gang, in the streets and each other’s gardens. In Iraq, we were trapped in a small compound. We weren’t allowed to leave. And it was just my brother and I. Day in, day out.”

Cath gained a teaching qualification and worked in a primary school in North Yorkshire, before going on to study a Masters that focused on how to create the right environments for children to flourish.

Cath says: “I began to realise how many people are influential in shaping a child’s life – not just the parents and the school – and it blew my mind.”

That realisation led to a decade working in policy, developing programmes to create the right conditions for people to flourish, but Cath wanted to go back to working with children.

She had been living in Hackney with her husband for four years and had fallen in love with the area. “It’s the green open spaces,” she explains.

So she applied for a position at Ann Tayler Children’s Centre and became its Deputy Head. She recalls: “It was a great, grounding experience seeing the huge difference that children’s centres make. Parents from every walk of life come together there, building up little moments of naturally and informally supporting each other.”

It was her next job, however, that in her own words, ‘brought everything together’. In 2008, she was appointed Assistant Director and, subsequently, Director of the nationwide charity Play England, an organisation devoted to defending and championing children’s right to play. For six years she was at the forefront of national and local policy on the subject.

“We helped build amazing playgrounds across Hackney and across the country,” she explains. Adding: “But that alone wasn’t enough. Children also need to be given the time, the permission and the opportunity to play.”

In 2014, however, she sensed another change in the air. She left Play England to set up her own social enterprise, Outdoor People. “On 10 May it will be exactly two years since we launched,” she says.

It began simply as a stall, selling thermos flasks on Broadway Market. Last month she expanded to a shop in Netil Market, near London Fields, selling outdoor gear and reinvesting the profits into projects that get kids outdoors.

Outdoor People is as much about helping to develop these projects as it is a shop. Cath supports organisations trying to help children access outdoor spaces. Her first client was Hackney Council which, as part of the Get Hackney Healthy campaign, contracted her to develop Hackney Wild Walks, three adventures for children to take their parents on.

Then in February, Unilever and Project Dirt asked her to develop their Empty Classroom Day campaign. Taking place on 17 June, it is focused on getting schools, children’s centres and youth services to celebrate outdoor learning and play.

“I’ve always just loved making environments in which children can discover who they are,” she says.’